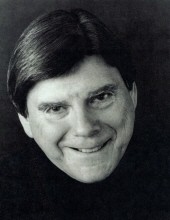 Fr. William “Bill” Hutchinson, PhD, Professor Emeritus in the Department of Music, Drama and Dance at Rhode Island College, passed away peacefully at the Hulitar Hospice Center in Providence, RI on October 9, 2021, at the age of 86. He died of complications from a serious fall on September 7.

Bill is survived by his wife of 39 years, Jeri Ann McElroy, of Smithfield, RI; his daughter Suzette Hutchinson (Robert Wilder) of Brewster, MA; his brother John Hutchinson and his nephew Brian Merz-Hutchinson (Michelle), both of Denver, CO; and a large extended family of in-laws, cousins â€‹â€‹and three generations of nieces and nephews who loved him dearly.

While attending the theater was his first love, Bill’s family and friends also knew him as a kind and generous man who enjoyed cooking, gardening and cheering on the Boston Red Sox.

Bill was born April 14, 1935 in Lancaster, Pa. To Parke William and Thelma (Beam) Hutchinson. Interested in acting since the age of six, Bill joined the drama club in college, began acting, and received his first award for exemplary performance. After high school he attended Franklin & Marshall College, where he obtained a BA in English in 1957. He then attended Princeton Theological Seminary, earning a B. Div. in 1960. Bill also received an MA in Speech and Drama from Teachers College, Columbia University in 1962 and a PhD. in theater at Northwestern University in 1968.

The opportunity to be close to Adrian Hall, founding artistic director of the Trinity Repertory Company in Providence, was a key factor in Bill’s decision to come to Rhode Island College in 1968. He has often said that attending the rehearsals of Adrian’s plays had taught him so much about directing. Teaching various undergraduate courses throughout his career, Bill has also served as chair of the music, theater and dance department, and has been the coordinator of the theater graduate programs. After more than four decades of experience in academia, Bill became a professor emeritus in college in 2004. He was affectionately known as “Doc” to the legion of students he guided throughout his career. long career, many of which pursued successful careers in the performing arts.

Bill’s first teaching post was at Tougaloo College in Mississippi, a sister school of Brown University, from 1962 to 1965. His experiences there during the height of the civil rights movement, including his participation in the Civil Rights Movement. Free Southern Theater, turned out to be a melting pot that shaped the values â€‹â€‹he carried in his life. For example, Bill’s preoccupation with social justice issues in the early 1980s led him to host a one-man show as Clarence Darrow, the crusading lawyer of the early 20th century. He received grants from the Rhode Island Committee on the Humanities (RICH) for this show, presented at Trinity Rep, and for his portrayals of other historical figures, including Roger Williams and Henry David Thoreau. The National Endowment for the Humanities (NEH) chose Bill Darrow’s performance as an exemplary project in 1984.

Bill’s distinguished career includes directing over 100 plays and readings between 1957 and 2006. A staunch civic advocate on behalf of his community, he was instrumental in the proliferation of the arts, from 1970 onwards. as theater coordinator for the Rhode Island Arts Education Project. He then held executive positions with the American College Theater Festival, the Providence Inner City Arts Association and the Rhode Island Playwrights Theater, and served as Artistic Director and Board Director of the NewGate Theater. He was also the director of dance and theater at Mathewson Street United Methodist Church in Providence from 1969 to 1975.

While Bill received numerous honors as a testament to his success, he was very proud of the Claiborne Pell Award for Distinguished Service to the Arts from the Trinity Repertory Company in 2003. In the same year, he also received several alumni honors. and a Distinguished Service Award from the Faculty of Arts and Sciences at Rhode Island College. Additionally, Bill received a New England Area Directing Award from the Kennedy Center American College Theater Festival in 1984. He received the Leonidas A. Nickole Award for New England Educator of the Year. England Theater Conference in 2013. In 2020 it was presented with the Albert Nelson Marquis Lifetime Achievement Award by Marquis Who’s WhoÂ®.

A memorial service and celebration of his life will be held at a later date.

In lieu of flowers, donations can be made to HopeHealth Hospice and Mathewson Street United Methodist Church.

The family would like to thank all of the healthcare professionals who took care of Bill throughout his life.

To send flowers or plant a tree in memory of P. William “Bill” Hutchinson, visit the Tribute Store.