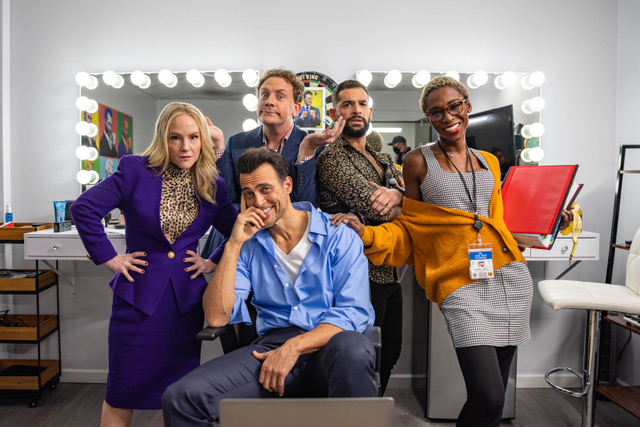 Jackson became producer of “Brutal”, a co-production with Julie Christeas from Tandem Pictures, after McConnell offered him the lead role. “We use ‘Brutal’ as a proof of concept. We think it would be a great series in the vein of ‘Veep,'” Jackson said.

Jackson and Landau, a merchandising and branding executive, married in 2014. They are parents to five-year-old twins, Willow and Ethan.

Shiny Boy started getting together about a year ago.

“We’ll watch a show or a movie together and we’ll both get the same rating about a scene,” Jackson explains.

Landau said, “Like last night, we were watching something and we stopped a scene and was like, ‘OK, if we wrote the scene, that’s what’s missing. Why people didn’t get it is because it didn’t happen or it didn’t happen.

They finally realized they might be onto something bigger than just couch reviews. “Jason kept saying, ‘We have to do something together. We have to work together,'” Jackson says. “I was a little reluctant because…”

Jason chimes in, “Because we want to stay married.”

But their working relationship is going pretty well. “We have about three or four projects in various stages of development, some that we write from scratch and some that we acquire from people,” Jackson says.

“We see that there is a missing hole in how people tell stories and in what stories are told,” Landau says. “The main thing is that we are both seekers of truth.”

Jackson says his “Call Me Kat” co-star and producer Maim Bialik was a source of inspiration. “Especially watching her write, direct and produce her first feature film while being an executive producer and co-star, I started thinking, I can do this,” he says.

Jackson’s credits also include “Julie and the Phantoms”, “Watchmen”, “American Horror Story”, “30 Rock”, and “Glee”. He was nominated for Drama Desk Awards for his work in “Xanadu” and “Finian’s Rainbow” on Broadway.