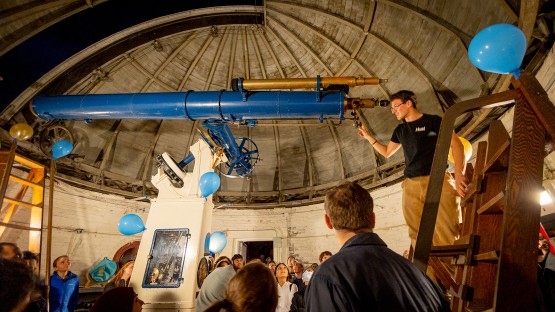 The Fuertes Observatory and its Friday night open house, where visitors can marvel at the starry sky through “Irv”, the telescope at the Irving Porter Church, have been bright spots in a bleak year of first pandemic for Gillis Lowry ’24.

“When everything else was dark, I knew I could count on the observatory and ‘Irv’ every Friday night,” said Lowry, an astronomy student and member of the Cornell Astronomical Society, a student organization. “After so many years of love for space, I was finally looking at this immensity that I had only ever seen through screens.”

Lowry and more than 115 others celebrated the telescope’s 100th anniversary at a special event Oct. 14 at the observatory.

Partygoers tucked into space-themed cupcakes, peered through the telescope and pored over a display of old instruments and photos from the observatory. Philip Nicholson, Professor of Astronomy, spoke about the development of observatories at Cornell – Fuertes is the fourth – and the people who championed astronomical research at Cornell.

Polina Shchetirina, who moved to Ithaca this fall with her husband, a Cornell postdoctoral fellow, saw the observatory and was intrigued when she heard about the event.

“The universe is so inspiring, to see something that’s bigger than us,” she said. “Also, I’ve never seen anything through a telescope, so I was excited to observe tonight.”

The telescope is one of the few in the world that still functions as it did in the early 20th century, using a weighted clockwork mechanism to track the sky as the Earth rotates on its axis.

The observatory’s namesake, Estevan Antonio Fuertes, professor of civil engineering, pushed the university to build and equip a first observatory for its students. This first building was a small wooden structure located on the Quad des Arts, built around 1880.

“For the first half of our observatories’ history, most of the work done there was done by civil engineers, who were trained to do field surveys,” Nicholson said. “One of Professor Fuertes’ main goals, shared with founder Ezra Cornell, was to introduce more practical elements into the curriculum.”

The construction of new buildings resulted in the observatory being demolished and relocated several times before it was moved to its current location, overlooking North Campus. “They thought no one would ever want to build anything on the other side of Beebe Lake,” Nicholson said with a laugh.

The building was completed in 1917, but it would be another five years before funds were raised for a large enough telescope – an effort led by Professor Irving Porter Church, Class of 1873, a mechanical engineering student who became a professor applied mechanics and hydraulics. .

A man of varied interests, Church owned his own 4-inch telescope. “He thought it was a shame the university didn’t have funds for a larger telescope to observe stars and galaxies, to do what would now be considered astronomical observations and used not just for engineering training. “, said Nicholson. When Church discovered a pair of 12-inch glass blanks that the University of Chicago’s Yerkes Observatory was not using, he himself donated $1,000 and held an alumni fundraiser. students to fit them into a compound lens and then provide an appropriate telescope mount. .

The telescope was always intended for use by students for observation, not as a serious research instrument, Nicholson said. Professor Samuel Boothroyd, Cornell’s first professor of astronomy, began the practice of holding telescope open days in 1923, a tradition that was continued into the 1960s by his successor, Professor William Shaw, and now by students of the Astronomical Society.

“The observatory means a lot to us, and it’s really nice to be able to be here to celebrate this milestone,” said Justine Singleton ’24, an astronomy major who is also part of the Astronomical Society. She said students also use the Hartung-Boothroyd Observatory, located about 10 miles from campus and built in 1975, for research and the senior lab class in astronomy.

Today, around 4,000 people visit Fuertes and its museum each year. The observatory is open every Friday from 8 p.m. to midnight for visitors to look through “Irv” and several rooftop telescopes to see planets, stars, nebulae and galaxies. Along with Friday events, Fuertes is sometimes open to the public for astronomical events like lunar eclipses, Singleton said.

Kathy Hovis is a writer for the College of Arts and Sciences.