Mccaffery Mysteries DISCOVER THE ART OF PUBLISHING
Home Event venue Inside the Dye House, a new artistic hotel and event space in Olneyville 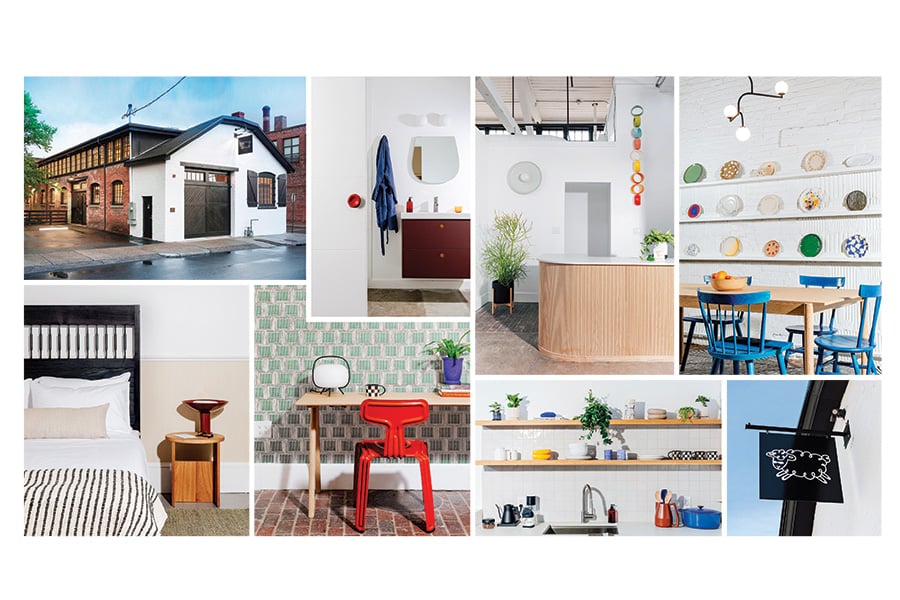 The boutique hotel is owned by URI graduates Everett and Valerie Abitbol.

There are sheep signs all over the hotel and the Dye House event space in Olneyville, which opened last spring. From the sheep-shaped bicycle racks welded by the Steel Yard to the cheeky toilet paper holders in the loft bathroom and to the names of the suites, Twill, Weft and Heddle – which are terms of weaving – the history of the building as a dye house for the manufacture of wool is intertwined in unusual places.

The Dye House was previously used as the J. Schatz ceramics workshop. Owner Everett Abitbol became elated with the space when he stopped to buy a bird feeder for his mother. Shortly after his first visit, he went to great lengths to purchase the building for his next hotel project, as the owners were looking to relocate. â€œThe joke is that I went to buy a bird feeder and ended up with a building,â€ he says.

Everett and his wife, Valerie Abitbol, â€‹â€‹previously founded Deacon Hospitality Group and started the Deacon Hotel in Philadelphia, a shrine that previously lived as a Baptist church until it closed. â€œI lived in a neighborhood in Philadelphia where a lot of public spaces became private through condominiums or apartments,â€ says Abitbol. He wanted to transform the building into a hotel with an emphasis on community and local art. â€œWe have a love for old buildings and public spaces, and the two came together with the idea of â€‹â€‹a hotel wrapped around a place where we offer a fair amount of community programming.â€

The couple hope to do the same with the Dye House in Providence. The Abitbols are both University of Rhode Island graduates who own a home in Narragansett, and they purchased the building in an effort to spend more time in the Ocean State with their two young children.

Dye House has a large open space, formerly the Ceramic Studio, which they plan to use for other community events as well as weddings, while three suites and a luxury loft accommodate guests. The loft can also be rented for private catered dinners and more intimate gatherings. Each room is designed with local art, furniture, and decor curated by famed Philadelphia designer Yowie. â€œThe hotel part of the project is what economically supports the place,â€ he says. â€œThe central area is open so it’s a place where the community can interact. “

The team is making event space available to surrounding groups like Mend Yoga, which began offering paid classes to members of the Olneyville community in late July. In addition, they are offering six months of free studio space to textile artist and recipient of the Design RI Catalyst Grant, Aleksandra Azbel.

â€œWe would also like to work with the Manton Avenue Project and the West Elmwood Neighborhood Association. We want to develop programming where our space can be useful to them, â€explains Abitbol. â€œPeople don’t realize how difficult it is to find affordable space and how important it is to be able to grant access. “

The team chose a sheep theme for the hotel to pay homage to the mill’s history, and they nicknamed the hotel’s mascot Baba. â€œThere is no cuter mascot than a sheep and this is how Baba was born, named by my daughter,â€ says Abitbol.

They are also releasing a children’s book featuring Baba to accompany the theme, and it will tell the story of Olneyville through the sheep. â€œMy daughter in saying that first meant that this was what it was going to be, because she is three years old and she is responsible for all of us,â€ Abitbol says with a laugh. 46 Dike Street, Providence, 347-868-2996, dyehouseri.com