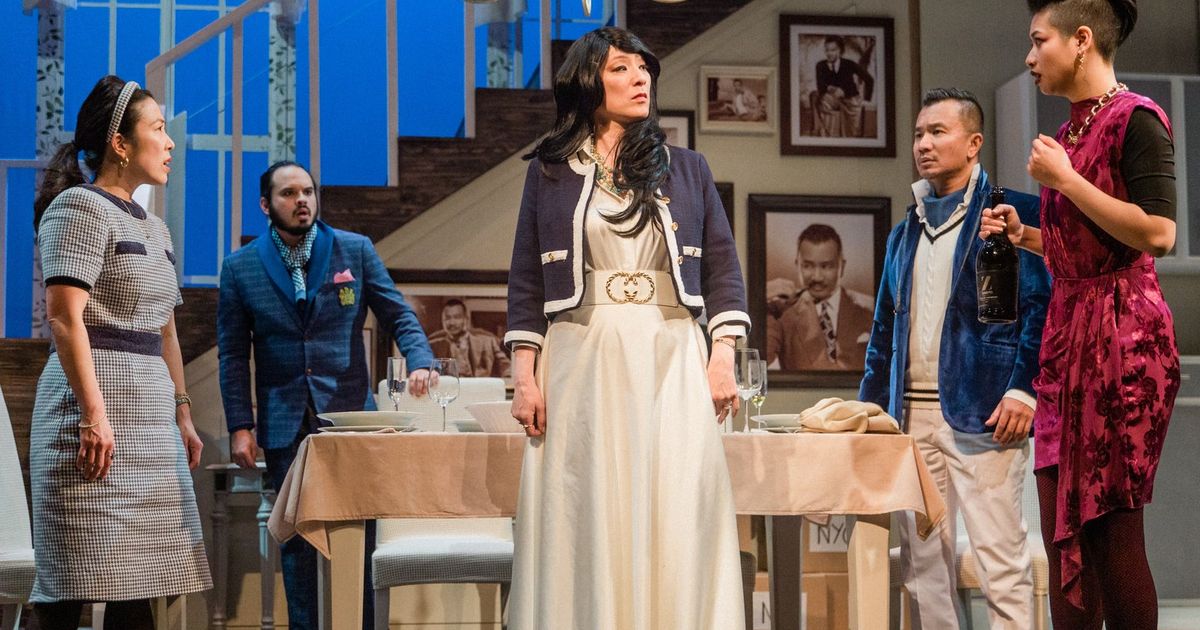 Leah Nanako Winkler is coming for your rich white family plays. In “Two Mile Hollow,” playwright Winkler parodies what she calls “Whites by the Water,” plays centering on white families who reveal secrets and complain about their lives, which have become boring because that it’s just “an endless weekend”. You don’t need to be intimately familiar with the litany of literary references Winkler makes in the play, from Anton Chekhov to Tennessee Williams to Sam Shepard, to generally appreciate the genre’s skewer. But this production of the Intiman Theaterthe first in its new home at Broadway Performance Hall, sadly lacks clarity, leaving the piece muddled and inconclusive.

The plot of the play is quite simple: the Donnellys gather at their home in the Hamptons to share its contents before the house is sold. The family is filled with broad-brush caricatures whose melodramatic secrets spill throughout the play. Blythe, the family matriarch who lost her husband 11 years ago, is the kind of person to meet resistance to her wishes with a quick “Don’t you know who I am?” His TV star son Christopher, following in his movie star father’s footsteps, laments his life’s pains of living in a fishbowl and under a microscope. Christopher’s half-sister Mary is in love with him, and his Yale-obsessed older brother Joshua tries to hook up with Christopher’s assistant Charlotte. Oh, and of course, each sibling considers themselves the “black sheep” of the family.

But what I keep coming back to and wrestling with the most in this production is Charlotte in the middle of this parody vision of a stereotypical wealthy white family. Although this play is about a white family, Winkler wrote the play to feature a cast of actors of color (Intiman’s production features an all-Asian cast from the Pacific Islands) playing exaggerated versions of these wealthy whites. It’s a choice that makes the mockery and criticism of these typically white-centric stories a little deeper. This is especially felt when the cast delves into the absurdity of their characters’ occasional racism, such as automatically thinking “Can’t Buy Me Love” is a traditional Buenos Aires song because it was sung to them by their ex. maid when they were young.

It’s when attention is directed to Charlotte, the only character who is actually written as a person of color, let things get muddy. Winkler’s play regularly warns Charlotte not to trust these people, even if they say they want to help. After all, they don’t understand what it means to work because you need money to fund your passions. They are the kind of people who can throw money at any problem.

Winkler draws a parallel between the Donnellys and seagulls: They seem careless, but they’re actually monsters, ready to stomp on the ground to trick the worms into thinking it’s raining so they come and deliver the seagulls an easy next meal. The Donnelly family is teeming with seagulls, and Winkler seems to invite you to watch them stomp around Charlotte. One line even directly warns Charlotte, “Once you’re introduced to these people as a helper, that’s how they’ll always see you.”

And this is where the tension wanes. Although Charlotte is intentionally the only really serious person in the room (captured exceptionally well by MJ Daly), the way Intiman’s production comes together under the direction of Jesse Jou (making his Intiman debut), seems understated. the emotional core provided by Charlotte. Charlotte’s desire to become a screenwriter, and the unique position the deep-pocketed, well-connected Donnellys find themselves in to make or break that career, somehow ends up being sidelined in favor of a focus on comedy of the behavior of the Donnellys. This is perhaps intentional, an attempt to convey to audiences how people of color can be afterthoughts in stories based on the experience of a white family.

But Daly is just too easy to clap for, and the play’s ending, which I won’t spoil here, centers on a major and potentially life-changing choice for Charlotte over whether or not to trust this family. At this point, however, this production seems uninterested in choosing Charlotte, having prioritized the family’s outrageousness over Charlotte’s journey.

Perhaps the reason I struggled with this piece is that it’s presented as a parody, not a satire. From a pure entertainment standpoint, “Two Mile Hollow” is full of delightfully silly ways to poke fun at a type of play that has permeated American theater for decades. Perhaps his message is as simple as saying, “Hey white people, these stories are ridiculous and we don’t need them anymore.” But this play nods to want to say more: referencing the lack of Asian casting on Broadway, mentioning how you can’t make white people feel stupid, and centering the play’s final major decision around its character alone. color canon.

I just don’t have a clear idea what Intiman and director Jou want audiences to walk away with. Is it just entertaining? Of course, I can meet you there. As an avowed fan of Chekhov’s work, I love seeing him parodied, he deserves it. But there is something under the surface here. I just want to know what.