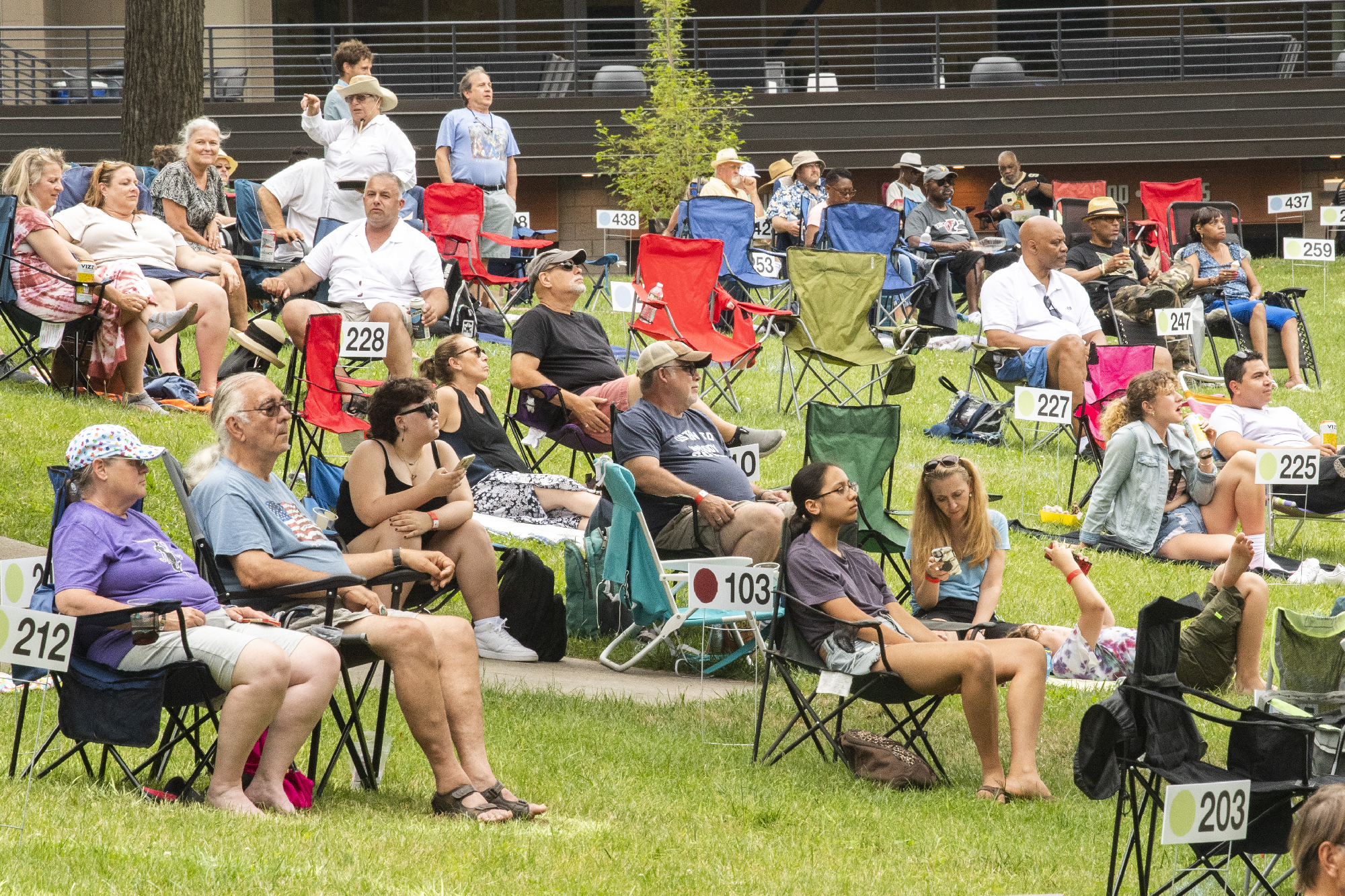 For The Daily Gazette

SARATOGA SPRINGS – The woman dancing down the aisle Saturday at the Saratoga Performing Arts Center danced what everyone felt as the Saratoga Hot Club, the first act playing at Freihofer’s Saratoga Jazz Festival, lit up “Swing 42” .

Musically, the festival has looked back. The Hot Club celebrated the “gypsy jazz” of the 1930s by Django Reinhardt and Stéphane Grappelli. Joey Alexander explored all the dialects of the piano, eloquent à la McCoy Tyner, Oscar Peterson and Teddy Wilson. Dianne Reeves sang and skated Brazilian style: Antonio Carlos Jobim and Joao Gilberto. And Christian McBride’s New Jawn has established itself as the Jazz Messengers, Charles Mingus and Miles Davis.

The music brought fans to SPAC, deserted for a year until the three-night solo stage of Phish’s guitarist, Trey Anastasio; and they brought their joy.

“It’s very emotional to be here,” said producer and festival co-owner Danny Melnick before the show. “Driving here yesterday was so exciting, touching and life affirming.” After last summer’s online festival, Melnick’s team and PSPC management got firm ‘no’s’ last winter as they told the state Department of Health of their plans for a tented show. with only one act per day and several passing audiences. He thanked PSPC CEO Elizabeth Sobol, Freihofers and other sponsors for staying the course as the Department of Health changed regulations, giving the go-ahead just weeks ago for a two-day festival with distant fans in groups inside the amphitheater and on the lawn. “Everything has been an evolution,” said Melnick, “changing as the company changed. “

“This is not the jazz festival you’re used to,” Sobol announced during the break between Alexander and Reeves. Well, yes it was. Reduced to four acts on a stage versus the typical 10 or 11 out of two, it still brought fans together in warm relief and a happy reunion, all to a moving soundtrack of musicians playing as if their lives depended on it.

Very few of the fans I met on Saturday also attend other festivals; some do Jazz Fest in New Orleans, but for the most part, it’s all ball game.

Masks were few in number, but fans stayed in their own pods surrounded in paint on the lawn and allocated seats inside. As Daryl of Newburgh was setting up a lawn chair, he recalled past shows here, naming Smokey Robinson as his favorite. Disappointed with the cancellation of the 2020 festival, he said Saturday’s renewal was the first live music he had seen in over a year. “It’s awesome, it’s fresh air, it’s exciting and relaxing. He said, somewhat reluctantly, that the downsized was ‘better than nothing’, but looked set to return next year. “It will be a blast. “

Brian and Wade from Queens and Brooklyn, respectively, shared a mood that I could smell like the sun. Wade was returning to his first festival in 30 years, recalling the stellar shows passed here by Grover Washington Jr. and George Benson. Brian said, “I do the trek every year, and I was ready to go last year and I had all the new stuff” – chairs, tent, cooler. “But in April, I knew that wasn’t going to happen,” he said, adding that he had watched the festival online last summer. Both said the brutal closure of New York was “surreal”, interrupting a basketball tournament they had attended. On his first comeback in 30 years, Wade found the lawn and amphitheater familiar, but the expanded hospitality features – new vending machines, VIP facilities and restrooms and covered dining – surprised him. “I love it here,” said Brian; “It’s awesome.” However, he was less impressed with the one-step format. “No, I want two stages,” he muttered, before clearing up as he recalled past shows by favorite artists, including BB King and Branford Marsalis. “It’s amazing, the artists we have here.”

Fans checked the food (much reduced), fashion and craft vendors, read books or newspapers, took naps, or worked on crosswords as it was time for the show to approach. The amphitheater seemed to have more people waiting for music than in previous years. Throughout the day, the scorching solos received warm applause and every act received a standing ovation. They have all earned it.

The fans’ hunger for music was poignant in the joyous buzz of expectation as the Saratoga Hot Club began to swing to ancient acoustic jazz at noon. With two guitars, violin, bass and clarinet, they lightly walked on the tradition, charming everyone. The graceful “Snowfall” and the zipped “Sweet Georgia Brown” set the stage for singer Julia Pozen, a petite woman with a great voice, first in Russian, in “Oche Chernye”. She came back after some spicy instrumentals to help conclude with a cheerful “Dinah”.

Like the equally precocious pianist Hiromi, Joey Alexander developed all his talent by collaborating with the best players and composing tunes. On Saturday, Kendrick Scott rocked sticks thick as tree trunks, mostly with a light touch, while bassist Larry Grenadier bridged Scott’s beat perfectly with Alexander’s melodic ingenuity. He formed songs bit by bit, training us as we heard him think. This telepathic trio, however, shared their thought, riff by riff, from the first notes. You could watch the bass drumhead swell in perfect time, nanosecond, with Grenadier’s bass. “This is our prayer,” in particular, sounded like the work of one spirit with six hands.

Unpretentious but warm, Alexander immediately had the crowd with him; they sang “Happy Birthday” – he turned 18 on Friday – even before a cake came out during the break, then sang it again.

No wonder Christian McBride, who performed last, noted: “I wasn’t too happy to continue after her!” “She” was Dianne Reeves, in her very first performance with a new all-Brazilian trio singing Brazilian music. She said she came out of the pandemic as someone else, “for the sake of it,” joked that she trained herself again to walk in high heels to happen, then sang the roof.

She started most of the songs big, then built them bigger, singing with the crisp clarity of Ella Fitzgerald, the hopping mastery of sunny bossa rhythms, and the majestic mountains of that nondescript thing called class. His band was aces, a force sensitive to every position: guitarist Romero Lumbambo, bassist Itaiguara Brandao and percussionist Negah Santos. But Reeves almost made them disappear when she sang skat or personalized a lyric with a hopeful bare heart. The crowd stood up as they wished everyone peace, life, love and joy and the band played it.

McBride had promised to “do the best we can” after Reeves, and pulled off a muscular, modernist and still spirited, super expert bluesy playing set. The group sometimes played as two trios: McBride bass with Nasheet Waits drums behind Josh Evans’ solos, trumpet; or Marcus Strickland, tenor saxophone and bass clarinet. Each horn player left while the other explored. As with Reeves’ band – fluid in their very first show – McBride’s New Jawn easily tore through the difficult ensemble passages that brought the whole quartet together, despite not performing together in months.

The uptempo tunes took off quickly and reached cruising altitude, particularly Evans’ “Pier One Import” with a crisp solo from its composer, while Strickland paired Larry Young’s “Obsequious” with high-pitched screams and low cries. When he switched to bass clarinet in “John Day” (McBride wrote it for a childhood friend), Strickland played so slowly and so softly, I wanted to know what a sad thing had happened to poor John Day. A veteran leader who knows how to get the best out of his players, McBride was always the most impressive and expressive soloist of his virtuoso group.

Ahead of the show, producer Danny Melnick promised a “big bang” next year for the festival’s 45th anniversary. When I met Daryl from Newburgh again he said, “It was great, all day, and I’m glad I was there, got it all. Everyone I have met has promised to come back next year, even Brian from Queens, who had complained earlier about the downsized format. He said, “It was different, but it was as good as it was charged.” He laughed and said, “I’m not going to leave. I’m going to stay here all winter to be ready for next year.

More from The Daily Gazette: