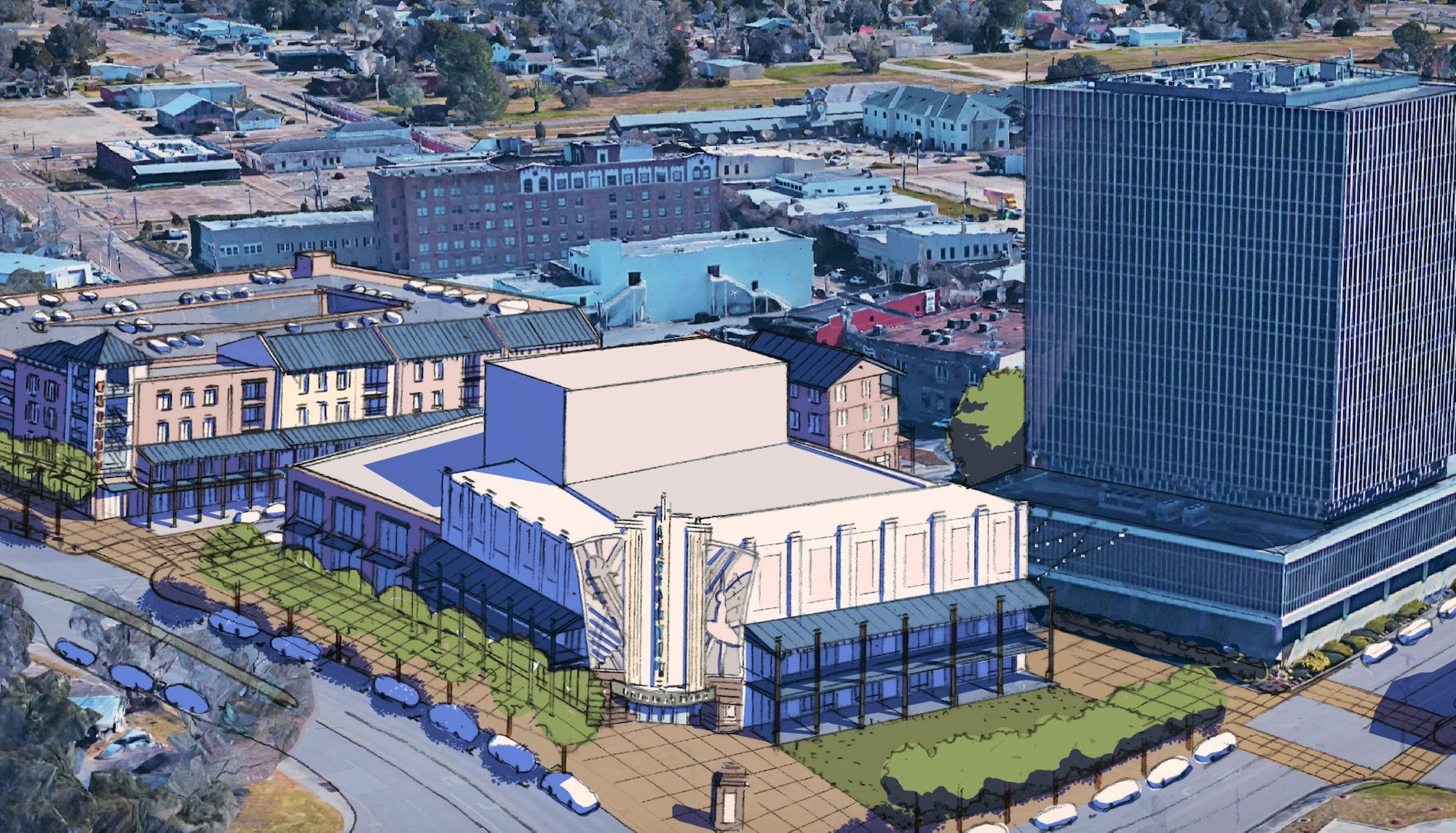 You may have heard that the Heymann Performing Arts Center may soon cease to exist and that new locations for the Performing Arts Center in Lafayette are being considered. One of the locations being considered is along the Congress Street corridor in Downtown Lafayette, and that would completely change everything. The other location being discussed is along the Cajundome Blvd corridor, which would not have such a significant impact, according to a recent redevelopment site survey.

Below is a comparison of the number of existing hospitality businesses within walking distance of potential performing arts center sites.

The green dots indicate the performing arts center and the parking lot. Blue dots indicate all existing entertainment, hospitality and retail businesses within a half mile radius.

The concept plan, which was commissioned by the Downtown Development Authority earlier this year, illustrates how a new 2,200-seat performing arts center could be sited along Congress Street next to the First Horizon tower. The plan would be transformational, adding over 750 structured parking spaces, additional restaurants and retail structures, and a new outdoor performance area.

Hypothetically, let’s just say that the Performing Arts Center is to be built at the proposed location in downtown Congress Street. It would completely remodel Congress Street along with W 2nd Street and W 3rd Street; paving the way for increased private investment, more walkable shops and restaurants, and a view that would rival that of other city vistas of similar size along a major thoroughfare.

The site, located just a block from Jefferson Street, is one of several similarly sized lots downtown that could serve as the site of a new performing arts center. The site survey was commissioned to show an example of how a downtown performing arts center works, said Downtown Development Authority CEO Anita Begnaud.

If Lafayette is to develop as many other comparable cities with large downtown areas have developed, placing such a focal point for the arts in a culturally arts-centric neighborhood only makes sense.

The Lafayette Consolidated Government (LCG) has already provided funding for structured downtown parking. And the addition of parking in the area presents several opportunities for private investors to build businesses that would complement a performing arts center, such as restaurants, hotels and retail.

“Not only could a performing arts center ‘fit’ downtown, but we believe a downtown location provides the best return on investment from an audience perspective,” Begnaud said.

Asheville, Greenville, Pensacola and Greensboro are just a few examples of successful downtown performing arts centers that were designed to be catalysts for downtown revitalization and are key contributors to the centers’ prosperity. urban.

DLU was one of several organizations that co-signed a letter to Lafayette City Council last week supporting the creation of a public process to choose a site for a new performing arts center that would consider the impact economic potential and overall community benefits. .

“As we continue conversations about the most important public investments we’ve ever made as a community, I think we need to engage the general public in a meaningful way,” Begnaud said. “The hundreds of downtown business owners, entrepreneurs, and residential and commercial building owners all deserve the opportunity to demonstrate that a downtown location would provide the best experience for visitors and the best return on investment.

Below are progress renderings of what the Congress Street corridor could become if downtown Lafayette becomes the host neighborhood for the Performing Arts Center.