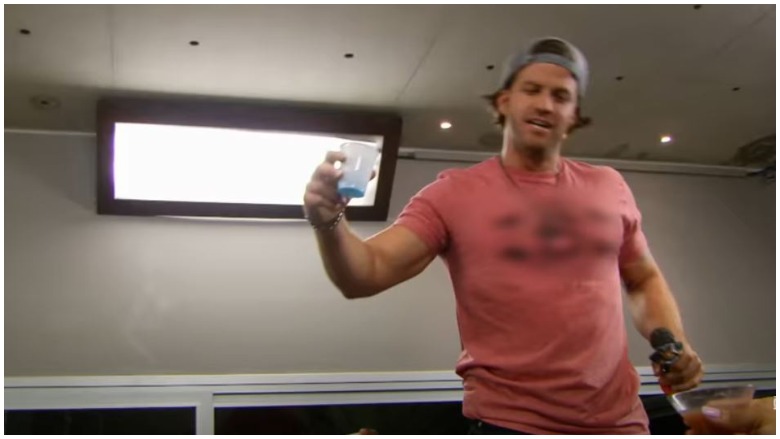 Johnny Bananas giving his classic toast at the start of a new season.

The competitions have gotten more intense on “The Challenge” over the past few years, but one thing that hasn’t changed is that contestants often go drinking and fans can see the cast members partying and making friends. alliances during their evenings. However, veteran Cory Wharton recently revealed that for the upcoming season of “The Challenge: Spies, Lies and Allies,” production is due to impose a consumption limit after things get out of hand.

About Us Weekly “Watch with usPodcast, Cory said, “This season we went drinking tickets. So once you used up your drink tickets, there were no more drinks for you. Per night, we got a certain number of drink tickets. The new rule was implemented because the cast, which included 19 rookies and tons of international reality stars, “got a little wild one night or a few nights,” he explained.

Cory, who finished ‘Double Agents’ in second place, told the outlet, “We kept punishing ourselves. [they said], ‘Look, you’re acting like crazy towards the production and the security team. You don’t respect them. So we have to limit the drinks. It was crazy this season, ”he said. “We were like children at a carnival. We had drink tickets! Once your drink tickets are used up, no more drinks for you.

In the past, competitors could drink whatever they wanted and were responsible for their behavior if they drank too much.

In previous seasons of “The Challenge,” cast members had no limits on alcohol consumption, and if they got too drunk during a night out, they had to face the consequences of their behavior, which they did. it’s about getting into a fight with a costar or going out with someone they shouldn’t. Cory told the podcast:

In the good old days when we could go to the bar, you could buy a bottle, you could buy whatever you wanted at the bar. It was on you [if] you’re drunk and sloppy. Now production is trying to control some of that.

It doesn’t seem like Cory was a huge fan of the new system like he said Us weekly, “I hope we can find a better system. They better not [keep it forever]. I’m not going to do this!

During “Double Agents”, Ashley Mitchell was talking about her drinking on the show and explained that this was the reason she ended up kissing Fessy Shafaat when she returned home to “The Challenge”. She said the next day that she was extremely hungover: “I was literally lying on the bathroom floor… I never had a hangover like that, I mean never.”

Chris “Swaggy C” Williams appeared as a rookie on “Total Madness” and revealed that all of the drinking that takes place on the show makes him uncomfortable during the season because he’s sober. At the time, he told the “Mania Challenge“Podcast:

As the weeks went by, I became more and more unhappy to be there. I would go to the bar with everyone, and I would sit in a corner and be like ‘yo, I don’t wanna be here.’ … Everyone is drunk and throwing up on the bus and screaming at 2 am… it’s not my way.

Although he joked about the downsides of the new system this season, Cory also told the “Watch With Us” podcast that things were different for him now that he had a girlfriend and two daughters at home. He explained, “When I used to go on the show, I was single. I had no children. I was like, ‘Who’s going to come?’ [And] I had my pleasure. I was really distracted on the show.

Today the “Real World: Ex-Plosion” star said, “I go to the show and I feel like I’m locked in. I know why I’m here.… I have a lot of people at home that depend on me. So when I go to the “Challenge” I get to work. I’m away from my family and I’m there, focused and determined.

READ NEXT: The champion of the challenge slams Costar: “Garbage bag for the back of the house”


Heavier on the challenge