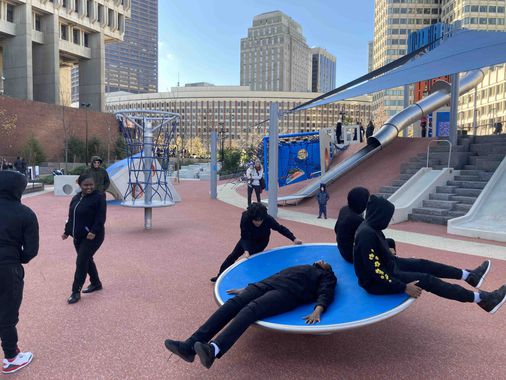 “City Hall Plaza is the people’s place, and it’s now a civic front yard that all can access and enjoy,” Dion Irish, chief operating officer for the City of Boston, said in the statement.

Daniel Abramson, an architectural historian and professor at Boston University, explained that the city’s renovation of the plaza is a diversion from its original purpose when it was first completed in 1968, according to the Cultural Landscape Foundation.

“[The plaza] had to look like a European square. It would be for crowds of individuals to mingle, sit and watch each other, talk,” Abramson said in a phone interview with the Globe. “They thought of it as a place of pedestrian crossing. You were supposed to cross it from one part of town to another.

The $95 million project reverses that goal, Abramson said, transforming the space into something closer to a public event venue. Abramson said the plaza once served as a regional magnet for downtown Boston. But today, the space has been “domesticated,” as city officials refer to the space as “Boston’s front yard,” he said.

“It’s a different take on public use,” Abramson said. “Wanting to turn the square into a neighborhood park is a historically interesting change in terms of the intentions and the way in which [the space] has been used.”

Architects and city officials involved in the renovation said at Friday’s event that they had three main goals: To make the space more welcoming, accessible and sustainable.

Inaccessible stairs connecting Cambridge and Congress streets, separated by dozens of feet of elevation, have been replaced with smooth, flat, brick slopes accessible to people who use wheelchairs, scooters or have other needs . The staircase leading to the main entrance of City Hall has been replaced with a brick slope, the north entrance to the building, closed since 9/11, has been reopened along the second floor entrance to the building and the plaza has renovated its lighting to make the space more accessible and safer, McCosh said at Friday’s event.

“Now I can proudly say that people with disabilities are no longer limited to one path,” McCosh said. “Now they can use the whole place. From today they have the same access as everyone else and that’s something they can be really proud of.

To foster community and accommodate more events in the plaza, the renovation included the installation of seven “plug and play” locations, according to the city’s press release, for all Boston residents and community groups to enjoy. . With the expansion of “civic event spaces,” Boston City Hall Plaza can now accommodate up to 25,000 people, according to the release.

This reimagining of the square’s space includes “three small venues for events and gatherings,” according to the statement, and a new civic pavilion has been erected on Congress Street equipped to support public gatherings, meetings and events.

The plaza is now home to a “kinder-brutalist” playground, said Amy Mahler, manager of the mayor’s office of new urban mechanics, during a press tour of the plaza, offering children the chance to play on slides and climbing in jungle gymnasiums. a space reflecting the iconic Brutalist architecture of Boston City Hall.

” I can not wait ! I will come back with the kids in more appropriate clothes for the slide,” Wu said.

The brutalist architectural style of the square is now complemented by inviting public art installations. After issuing a call for artists in February, the city selected metalworker Rhea Vedro to create a sculpture. It will be displayed to visitors at the northern entrance to the square for a year from next spring.

The city also commissioned public artist and illustrator Yuke Li to create two-dimensional graphic designs “for the new display system on the west exterior wall of City Hall,” according to the city’s press release. , and “the wall panels near the new civic pavilion, which will also be installed for a year.

“We are so excited about the opportunities for creative expression and cultural celebrations that this renovation brings to the city,” Kara Elliott-Ortega, Chief Arts and Culture Officer, said at Friday’s event. “This plaza should reflect all of Boston’s communities and cultures, and the arts are needed to make it a welcoming place.”

Another main priority for the renovation was to use “green infrastructure” to help the city meet its environmental sustainability goals, according to the city’s statement. The plaza now displays “permeable surfaces,” such as a resin-bonded sidewalk that will absorb up to 180,000 gallons of rainwater, which will be reused to water the 250 new trees and countless other plants scattered to provide shade, beautify space, and improve air quality.

City officials also replaced 50 lights with “efficient LED technology” and “22,500 feet of granite and brick pavers were reused or recycled,” according to the release.

“We have focused on integrating sustainability into all aspects of the design [of the plaza]Sasaki Landscape Architect Mauricio Gomez said at Friday’s event. “Adding hundreds of trees and thousands of shrubs and perennials to the site provides significant environmental benefits.”