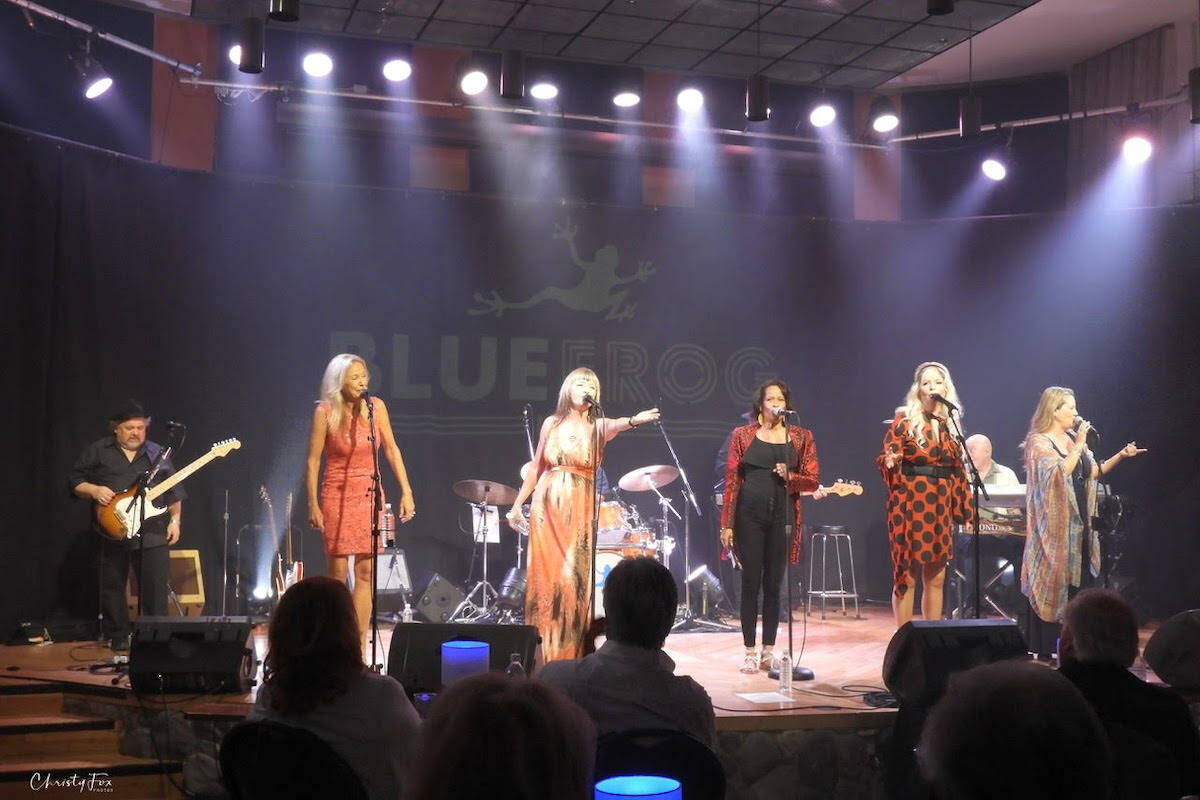 The winners of the sixth Surrey Art & Business Awards were announced on Tuesday evening (22 November) at an event at the Sheraton Vancouver Guildford Hotel.

The awards, presented by Scotiabank, are organized by the Surrey Chamber of Commerce to celebrate people and businesses that enhance Surrey’s arts community.

“We need the arts more than ever for our city’s economic development, mental health and creativity,” said Anita Huberman, President and CEO of SBOT.

Biographies of the winners are displayed below, as submitted by the Surrey Chamber of Commerce.

“Blue Frog Studios is a concert hall and commercial recording studio. This state-of-the-art 5,000 square foot facility can accommodate an 80-piece orchestra and accommodate 100 studio audiences for unique, up-close and personal concerts with some of the world’s most talented artists. The studio provides world-class sound, lighting, and 4K video and audio recording technology with an exceptional production team. Blue Frog Studios produces over 200 concerts a year and has hosted several concert artists and Juno and Grammy award winners, including Jim Byrnes, 54-40, The Washboard Union, Jimmy Rankin, Jeff Martin of The Tea Party, Chilliwack, Valdy , Dan Hill , Shari Ulrich, and many more. In 2021, Heritage Canada’s Creative Export program chose Blue Frog Studios to promote Canadian musicians and performers outside of Canada. With a significant grant, Blue Frog Studios developed the “Canadian Music Unearthed” project, which has greatly benefited artists, musicians, video production support and staff while capitalizing on a esteemed global online entertainment sector. to $150 billion a year by 2025.”

“Lyn Verra-Lay comes from a family tradition of giving back to the community. As a child, she played for the Whalley Legion Community Band, practicing her flute in a community marching band led by her father. She taught art for 23 years at the Surrey Arts Centre. She also volunteered for over 30 years with the Fraser Valley Musical Society as a CTC nominated performer, producing many local musical theater events. She volunteered as a producer for A Night on Broadway, a benefit concert for the Surrey Food Bank, which raised over $10,000 to support the food security challenge. In 2017, she was named BC Culture Days Ambassador, representing Surrey’s diverse cultures and arts. Currently, she works as a coordinator for the Youth Arts Council and the Wandering Angels Lantern Festival.

“Argel Monte de Ramos is a talented Filipino singer and songwriter. He started his musical career in 2014 when he sang at a fundraiser in Fleetwood for the BC Cancer Society. Since then he has taken part in many community events in the Lower Mainland including Surrey Night Market, Surrey Doors Open, Kwantlen Polytechnic University Open House and most recently the Surrey Fusion Festival in Holland Park. In 2021, Argel received the Excellence by a BIMPOC Artist Award at the Fraser Valley Music Awards. That same year, he also won Music BC’s Canadian Songwriter Challenge. He is also the recipient of a Gold Award for Songwriting and a Silver Award for Vocals at the World Performing Arts Championships held in Los Angeles. Besides music, Argel is also interested in the performing arts and works as a theater actor, playwright and director. His dedication and passion inspire young immigrants who dream of making a name for themselves in the music and arts industry. Argel also works as an assistant for Arts Umbrella’s community programs in Surrey, helping students access free arts classes.

“Liane Davison served 32 years of unrivaled dedication and passion for arts and culture in Surrey before retiring as Culture Manager for the City of Surrey earlier this year. Liane began her career as a curator at the Surrey Art Gallery and was recognized by BC Business Magazine as one of the top 30 people under 30 to watch for future achievement. For 18 years she curated numerous exhibitions, including the sound installation Forty-Part Motet by Janet Cardiff and the Quilt of Belonging by Esther Bryan. Under his leadership, Liane enabled the acquisition of essential works from the Museum’s permanent collection, many of which are national treasures. She has facilitated community engagement initiatives that have resulted in over 100 public art projects like Eagle Calling, an elegant Frank Hurt Park High School sculpture commissioned by Robert Davidson, one of the world’s foremost visual artists. acclaimed from Canada. Liane was instrumental in the development of Surrey’s Culture Plan (2012-2016) and was subsequently a member of the staff working group for the City of Surrey’s award-winning Parks Recreational Culture Strategic Plan (2018- 2027), which included many cultural goals and strategies. . She also presented the concept of the interactive art museum – securing the future of the gallery at three times its current size downtown (a commitment of $15 million in the 2024-2025 capital projects budget of the city). The town’s cultural community will continue to grow from decades of seeds planted during Liane’s tenure to champion Surrey art and artists for generations to come. Liane’s contribution to the arts and culture industry in Surrey is a true legacy.